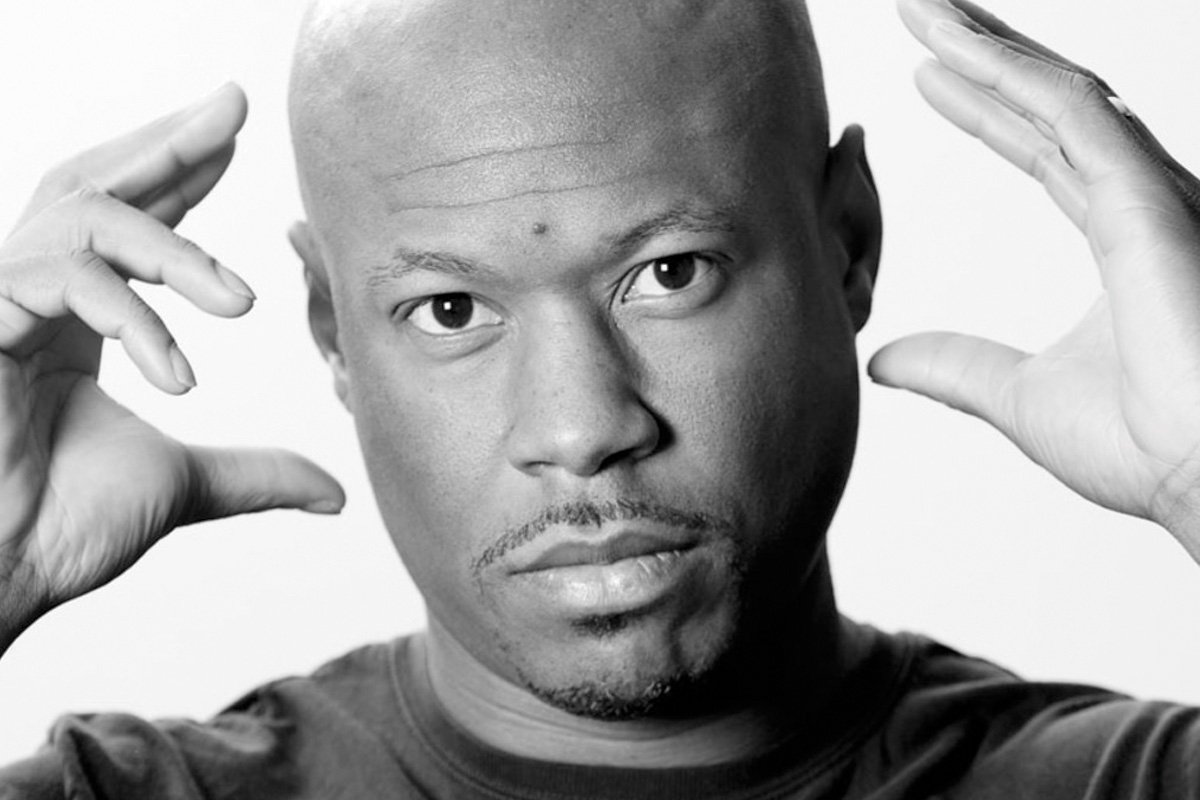 “Before I got into this music I wanted to be an originator ; I wanted to be original”.
Robert Hood needs little introduction. Founding member of the legendary group Underground Resistance as a ‘Minister Of Information’ with ‘Mad’ Mike Banks & Jeff Mills, his seminal works on Jeff Mill’s Axis and his very own M-Plant imprint paved the way for a wave of stripped-down dancefloor minimalism that directed much of techno’s path throughout the late Nineties. As Birmingham’s Surgeon once remarked, ‘When Hood released his pivotal ‘Minimal Nation’ EP in 1993, it was like a bomb went off.’

Robert Hood makes minimal Detroit techno with an emphasis on soul and experimentation over flash and popularity. Having recorded for Metroplex, as well as the Austrian Cheap label and Jeff Mills’ Axis label, Hood also owns and operates the M-Plant imprint, through which he’s released the bulk of his solo material. As part of the original UR line up whose influential releases throughout the early and mid ’90s helped change the face of modern Detroit techno and sparked a creative renaissance. Infusing elements of acid and industrial into a potent blend of Chicago house and Detroit techno, UR’s aesthetic project and militant business philosophy were (and remain) singular commitments in underground techno. Hood left Detroit (and UR) with Jeff Mills in 1992, setting up shop in New York and recording a series of 12-inch Eps. He began to concentrate on his own production ‘Vision EP’, the ‘Riot EP’ and X-103 were big steppingstones for him as they were the first releases he worked 100% on his own. The X-101 to X-102, were Waveform Transmission projects with Mills for Tresor. He slowly progressed to work more and more on his own, but collaberated on some of the first Axis releases with label owner Jeff Mills as H&M (Hood & Mills) with ‘Tranquilizer EP’ and ‘Drama’.

He soon decided it was time for him to start his own label to focus on what was in his soul musically.and set up M-Plant in 1994 releasing singles such as “Internal Empire,”, “The Protein Valve” “Music Data,” and “Moveable Parts. “M-Plant is what I’ve always wanted to hear: the basic stripped down, raw sound. Just drums, basslines and funky grooves and only what’s essential. Only what is essential to make people move. I started to look at it as a science, the art of making people move their butts, speaking to their heart, mind and soul. “It’s a heart-felt rhythmic techno sound. M-Plant is just M. minimal. “
Although his desire to remain underground has been replaced by an urge to reach a wider audience, Hood remains fiercely critical of artistic and economic movements destructive to innercity communities and has combined his musical enterprises with outreach and social activist ends. With this in mind the seminal ‘Nighttime World Pt.1’ in 1995 and ‘Nighttime World Pt.2’ in 2000 incorporating Jazz, Soul, Hip Hop as well as Techno and House.

The album is based on the 1971 classic science fiction film, ‘The Omega Man’ starring Charlton Heston and derived from Richard Matheson’s 1954 novel ‘I Am Legend’ (which was recently readapted to the big screen). The album is not intended as an exact soundtrack to run alongside the original film, but Hood was heavily influenced by the movie and has used it as his inspiration.

This album’s concept is a long-held vision of Hood’s and the film’s stimulus has presented itself both musically here, and even spiritually for him, since he watched it as a child. Its themes appear even more relevant today and continue to haunt: “it’s definitely metaphoric,” he says “and if we don’t heed the signs, this is where we’ll end up. We live in a society where we just consume. We just take. We don’t operate on the concept of giving”.

The film resonated with him down the years and there are many parallels between the post apocalyptic world portrayed in the film and parts of Detroit where he grew up. “You can look at downtown Detroit at night after the nine to five have migrated home and it turns into a ghost town,” he muses. “You had abandoned buildings during the crack epidemic and this progressive city had these ‘zombies’ walking the street. Detroit is a prophetic vision of the sign of things to come.”

Whilst the brooding ‘Towns That Disappeared Completely’ and laser-strafed ‘War In The Streets’ certainly brings these comparisons together, the album still remains a work of science fiction, albeit one rooted in decaying urban realism as opposed to otherworldly fantasy. Tracks such as ‘Are You God?’ delve into the ‘messiah complex’ of Charlton Heston’s last man on earth battle to save humankind from the infected inhabitants of earth whilst the album’s preceding single ‘Alpha’ is dancefloor minimalism at its finest – yet another lesson in stripped down machine funk. Floating between cinematic experimentalism ‘The Plague (Cleansing Maneuvers)’, low-key minimal grooves ‘The Workers of Iniquity’ and pure dancefloor adrenalin rush ‘Omega (End Times)’ Robert Hood gives us another minimal masterpiece.

As Hood himself concludes. “This movie is an exercise in faith. Everybody is dead. Through all this adversity there is still hope but man has to repent. This is a message of hope and through the adversity people will begin to look at a higher force.”