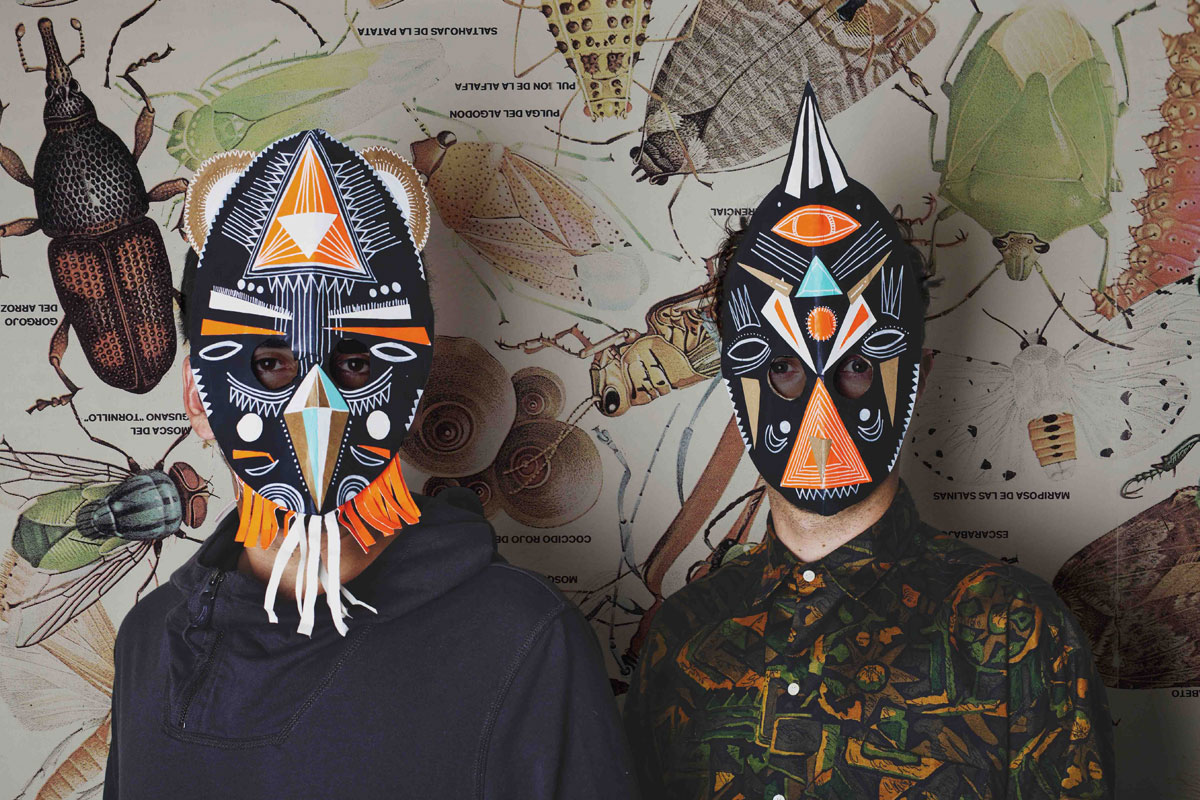 Dengue Dengue Dengue! is a Tropical Bass duo. Behind the masks are Felipe Salmon and Rafael Pereira, two producers, dj’s and graphic designers from Lima-Perú. For their live performances they team up with Nadia Escalante (A.K.A. Vj Sixta) for a full Audiovisual Show.
DDD was born in mid-2010 and inmediatly made themselves well known thanks to an impeccable audiovisual show, remixing and making mash-ups from their own tracks with old cumbias and modifying cumbia cult themes to electronic versions. All this always joined by amazing visuals and the always present masks.
In early 2011 they began to publish their first original productions, being bloggued in major and specialized music portals in USA, Europe and the UK. Their sound started to spread faster, playing many festivals in Peru and along with the “Auxiliar” Collective, started producing the TOMA!
Sessions, helping to consolidate the growing and vibrant Tropical Bass movement in Lima, inviting musicians and DJs from different places to share sounds and ideas.
In 2012 they released their debut album “La Alianza Profana” (or “The Unholy Alliance”) and the video for the single “Simiolo” .The Album and video, both published by the Peruvian label Auxiliar, are an instant success with both the press and fans, locally and internationally . The album caught the attention of Berlin´s Chusma Records, who later (2013), re-released the Album for Europe, Asia and Australia. Later that year they play at the NOVA Art Festival in Sao Paulo, Brazil and the III Iberoamerican Design Bienal in Madrid, Spain.
2013 is the year where things really took off, it started with a great Mexican tour and in June, an amazing two month European Tour, playing at major festivals and clubs all around Europe in cities like Berlin, Vienna, Prague, Madrid , Barcelona, Paris, Stockholm among others. In July Chusma Records released the Simiolo Remixes EP, and Enchufada Records the track Lockumba for the “Upper Cuts” series, showcasing yet another side of the Dengue Dengue Dengue! sound.
By 2014 the sound of DDD matured into a wider spectrum of sounds, bringing elements not only from Peru, but studying and researching other cultures and their native sounds, traveling around Europe, Asia and the Americas playing shows. collecting sounds and ideas.
Bio
The duo released the EP “Serpiente Dorada” on Buraka Son Sistema´s label Enchufada Records, with 6 new tracks that takes their sound to a new level, touring around the world playing 3 European Tours (42 Shows) and and also playing in Cuba, Japan. Argentina, Chile, China, Brazil, Colombia,etc. playing in the most renowned festivals like Roskilde, Dour, Paleo and an amazing show at the SONAR Festival Dome, reviewed by Xlr8r as one of the best shows in the festival.
They also get the honour of getting invited by the Red Bull Music Academy to do a lecture on their academy sessions in Tokyo.
In 2015, the duo was commissioned by legendary Salsa record label Fania Records to remix one of his classics for a special 50 year anniversary compilation. They also released a new track for a
Greenpeace / Rhythm and Roots label project, a compilation of birdsong inspired tracks. Its also been a year of intense touring in Latin America, Europe and USA.
This year DDD are releasing their second full length album titled “Siete Raices” (Seven Roots) on Enchufada Records. This record also comes with a new video of the track “Guarida” (featuring Peruvian singer Sara Van), directed by Mikael Stornfelt.